A new campaign has been launched to help educate families and health professionals about paediatric Type 1 Diabetes.

The campaign focuses on raising awareness of the early warning signs of paediatric Type 1 Diabetes (T1D) in order to prevent the onset of Diabetic Ketoacidosis (DKA); a metabolic emergency with significant mortality and morbidity.

“DKA is a paediatric emergency with complications such as cerebral oedema and deep vein thrombosis but can be prevented when recognised early. But it’s also a frightening introduction to what is a lifelong chronic disease,” he said.

Children considered most at risk are those under two who are quickly affected by metabolic acidosis of DKA. Dr Yates also said determining the prevalence of DKA was difficult due to current data gathering processes, however of the children diagnosed with Type 1 Diabetes in 2019 in the Mackay Hospital and Health Service alone, 70 per cent had presented with DKA.

Dr Yates said the lack of parental and carer knowledge of Type 1 Diabetes symptoms was compounded by the fact that GPs were less familiar with Type 1 compared to Type 2. “The symptoms of Type 1 Diabetes are vague and often reported or considered separately, not as a collective.”

The key symptoms of Type 1 Diabetes include thirst, tiredness, going to the toilet frequently and weight loss, which have been summarised as ‘the 4Ts’ (tired, thin, toilet, thirsty). The 4Ts are the focus of the campaign along with the tagline DKA: Diabetes, Know the signs, Ask.

“In many cases of DKA, families made repeated visits to a health professional, but Type 1 Diabetes was either missed or not considered. This campaign will help both families and healthcare workers to learn the signs of Type 1 and therefore prevent the onset of DKA.”

Through similar improvement efforts, New Zealand has reduced the DKA rate to 25 per cent where it has plateaued for the past decade.

Clinicians can conduct a finger prick blood glucose test which has high validity. A result of >11 mmol/L is considered diagnostic of Type 1 Diabetes and requires urgent referral to a paediatric endocrinologist.

A range of clinical resources have been developed to support increased awareness and understanding of DKA and are available on the CEQ website.

The Townsville Hospital and Health Service was funded by the Statewide Diabetes Clinical Network to run the campaign, which is being supported by the Juvenile Diabetes Research Foundation (JDRF), Diabetes Queensland and a number of community organisations. 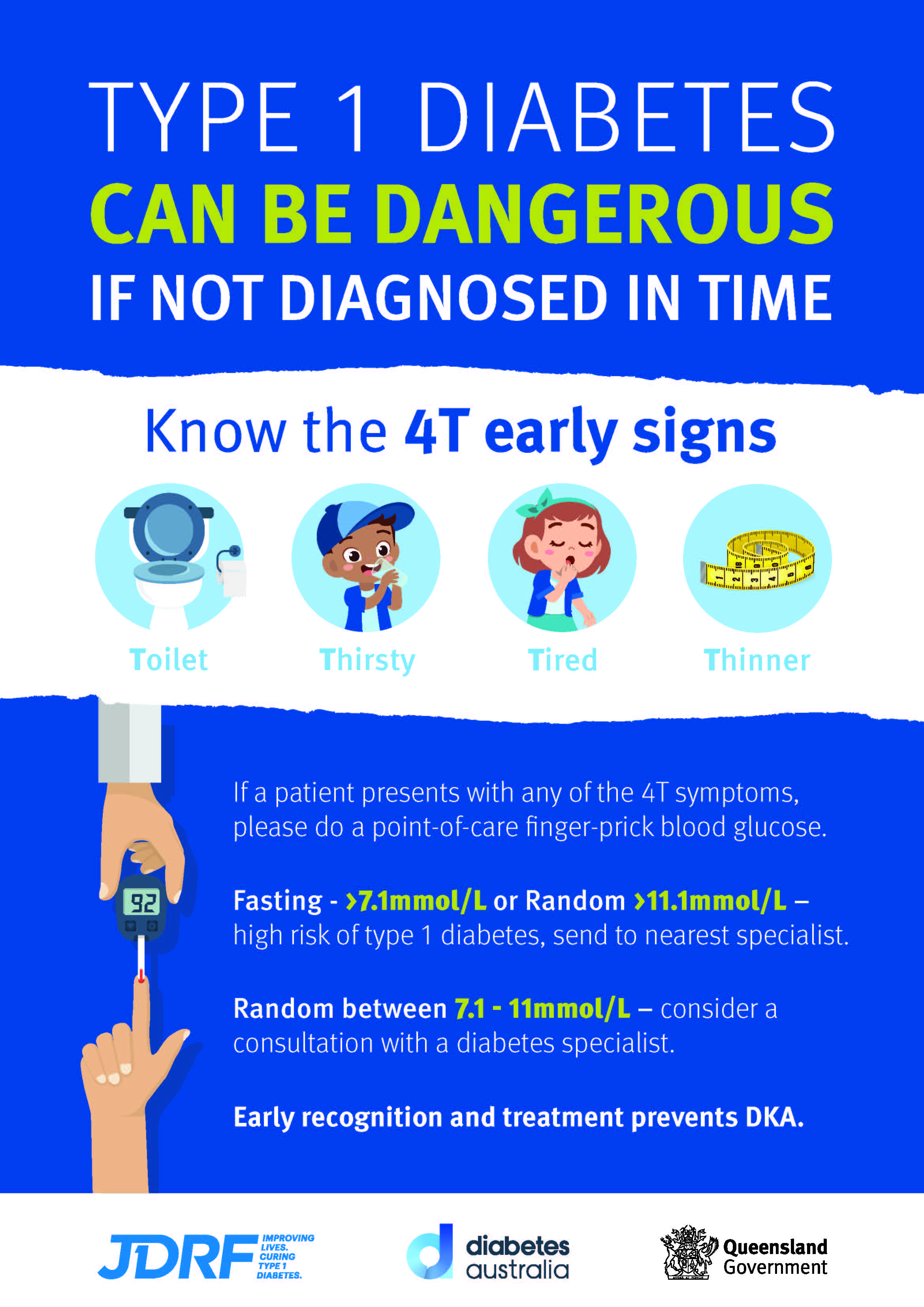